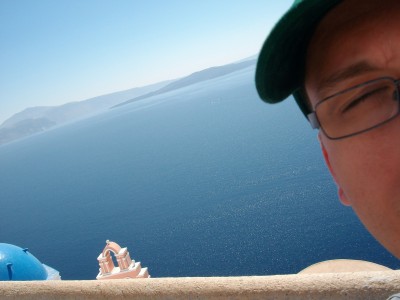 As already mentioned, I actually have been traveling lately. I spent two weeks in Greece. So you will have to excuse the approaching flood of pictures and stories around Greece. I will get back into writing about the expat life after that.

The first stop on my trip was Santorini. Santorini is actually a group of islands around a very ancient volcano. If you are into this kind of thing, the best thing to do is take a boat out to the volcano and walk around on it.

I landed in Santorini around 10am and got into the main town of Fira after checking into my hotel at around 11am. I only had one and a half days here before my boat trip left, so I wanted to make the most of it. Wandering through Fira I walked into a tour agency (one of about a hundred I saw) and asked if there were any volcano tours that I could catch that day. He sold me a ticket and told me if I ran to the cable cars (through narrow streets dodging very slow old people and assorted tourists) I could make a tour that did the whole ring. I was excited. In the end I had plenty of time even for an ice cream before the tour boat arrived.

The trip was fascinating. We went walking up the volcano and the guide talked to us about history of the volcano and about Santorini. It was more toward education than entertainment, but I loved it. This was my first day after flying and I was still on a high. (also hadn’t sleep the night before, adding giddyness).

So the volcano has been active for ages, last erupting in the 1950s. It isn’t the big classic cone, but because of the seawater it can be even more destructive. The magma opens a crack and the seawater rushes in to create a pressure cooker style thing that can be even more explosive. During our lunch stop I had no interest in shopping or walking up hills in the sun, and had a chance to talk to the guide more one on one. He was really cool. We had a great conversation about major volcanoes in the world and the history of this one. There are legends involving Santorini in Atlantis.

Ok, I know most people are here for the pictures, so here are a few. The rest are in the gallery at the bottom. 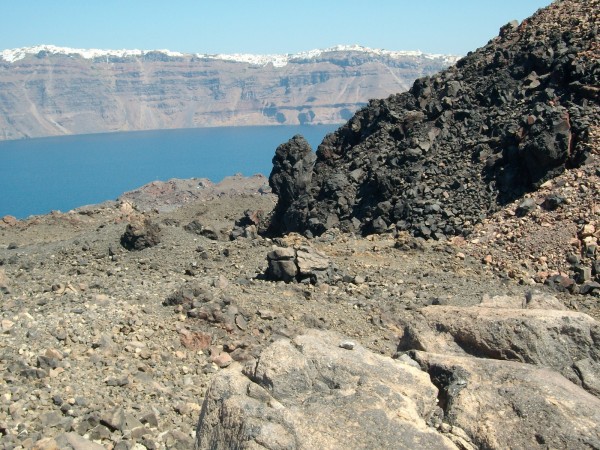 The volcano has been active so long the island is apparently composed of a number of different craters that have been active at different times. Different sections of the island have very different rocks. some are moonscape like and some are black and sharp and spiky. The caldera ring lake provides some really great backgrounds. 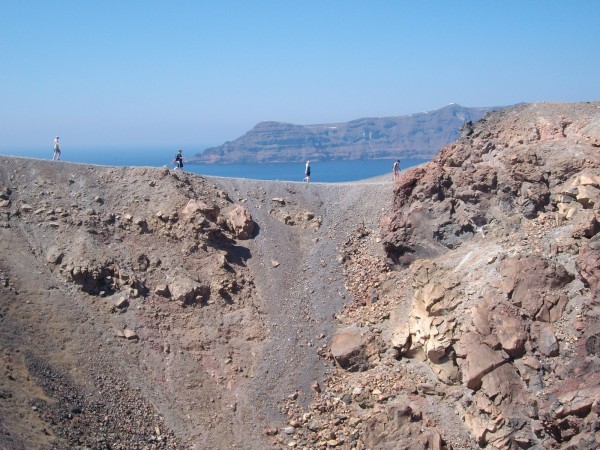 Just looked over at one point across the massive main crater and saw a few members of the tour group walking along the ridge. I liked that they were all perfectly spread out. 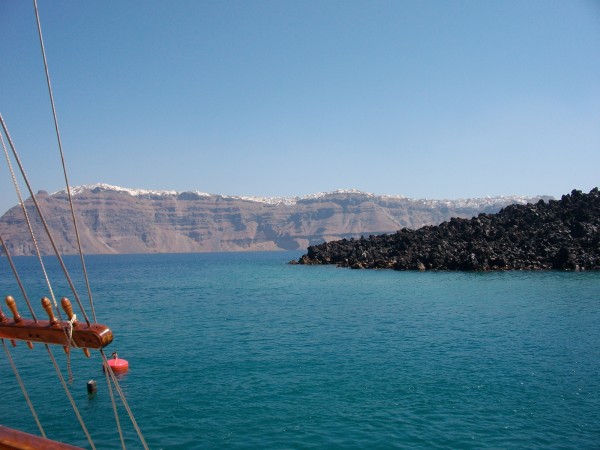 The second stop of the trip is at a smaller volcano island just below the main island. There are hot springs there to swim in. It is hilarious to hear the instructions to change into your swimsuits and the history of the springs in 6 languages. I didn’t have a suit (read intro about running for cable car), but this view toward Oia was great. 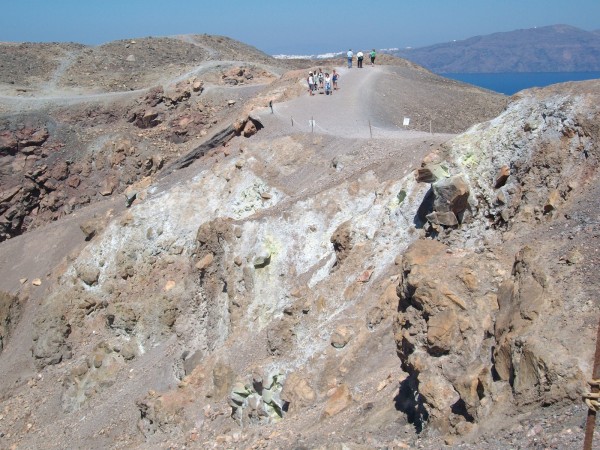 This looking back into the main crater of the volcano. The yellow areas are sulfur deposits. The seawater minerals leech and are brought up with the steam. As a reminder that this island is still active, the area is constantly steaming (the things are called fumeroles) and smells of sulfur.

I well recommend the trip. The volcano was a really awesome way to spend a few hours. The rest of the trip was nice to talk to Eugene about volcanoes, but except for him could have done with just seeing the volcano. So if you don’t have time, skip the hot springs and the lunch stop.