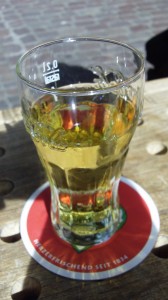 If you have never been to Germany or just been through here on a beer tour, perhaps you have not experienced the wonderfulness of Apfelschorle. This mix of apple juice and bubbly mineral water is so popular that even the soda giants have their own brands of it. The ready mixed ones are ok, but the best come from a cafe where they mix it themselves at the bar.

Pretty much anything can be made into a “schorle”. Join me on an exploration of the “schorle” idea.

Quick note on words. I use the German word Schorle throughout this piece. The only English word that seems to fit is “spritzer”, but that is too linked to wine spritzer for me, so I use the German.

Tap water is very rarely served here. You can ask for “Leitungswasser”, but I only ever see it given with espresso without asking. Mineral water here can be either “sprudeln”, bubbly, or “still”, flat. Normally if you just order it in a restaurant expect it with gas and bubbly. There are tons of brands both local and national. In grocery stores it is quite common to buy a 6 pack of 1 L bottles of it.

“But Wait,” you say. “You said this article was about Apfelschorle. What does that have to do with fizzy mineral water?” Well a Schorle is at its base fizzy mineral water with something else mixed in. Take a look at the several families.

This is by far the most common family of Schorle. It is what is says, various fruit juices mixed with fizzy mineral water. If a cafe will serve juice in a glass, I expect that they will make a Saftschorle of any of their juices. The only time I have been refused is if they only carry juice in single-serve bottles; at which point I don’t really want it.

Apfelschorle is within this family the most popular. It will usually have its own line on menus while the other juices have to deal with just a general Saftschorle line. Most mineral water bottlers and soda companies have their own pre-mixed bottles.  The best ones do seem to come from cafes and bars that mix their own. There is even a cafe here that will use not the clear apple juice, but the cloudy stuff. It’s interesting.

In addition to apfelschorle, I have recently had grapefruitschorle and cranberryschorle. I even started making them at home. Orange juice can certainly be made into schorle, but it seems to heavy to me to want to.

Ok, before we go further I want to address why you would want to make something a schorle. I have no clue the actual origin of it all. I do know that by cutting the pure juice with water you reduce the sweetness. Germans do not have the sweet tooth that most Americans seem to have. Schorles tend to be a few cents cheaper.  And really in the summer having the light fizzy backing to the taste of juice is very refreshing. To those watching calories, mineral water has none; so a schorle is a “light” version of the mixer.

Using the bubbly mineral water makes it also into a lighter fresher version. And the bubbles somehow allow this magic to happen without feeling just like you are dumping tap water into a glass of juice.

Like I mention above, the only word we seem to have in English for this is “spritzer”, which has a strong wine connotation. These wein-schorle exist here as well. White or red, but almost always an open house wine. Making a wine schorle has all the benefits of the juice schorle in addition to cutting the alcohol so you can enjoy a glass or two without getting drunk so fast. Like with the juice it gives you the taste and enjoyment of wine without so much of the alcohol.

Ok, yes there is even beer-schorle; although it is not called that. In the spirit of schorle, beer is mixed with a number of different things each with a different name. These names also seem to be regional implying different local beers with various mixers.

So if you order just a normal Radler, you will get a sweet soda mixed with beer. This is also popular enough that a number of beer companies have started bottling Radler. I find that sweet and beer is not a good combo, and will send them back if the didn’t hear my “saures” addition. The last one, our beerschorle, is what I will drink when not drinking full beer. The mineral water water cuts the alcohol and calories without changing the taste of the beer. It is a good drink if you are trying to not get so drunk (like on the night after having a big party and waking up under a bush halfway across town).

So the next time you come to Germany (you are coming right?), try ordering an Apfelschorle for lunch. Or a Saures Radler at dinner.