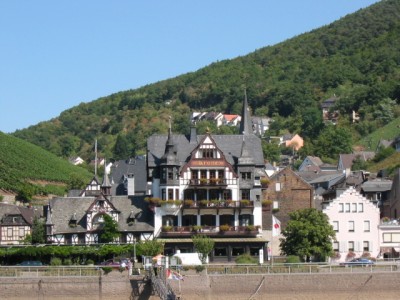 The Rhine river is one of Germany’s defining features. One of the absolute best places to see a bunch of castles, another one of the country’s defining features, in a short time is to take a Rhine cruise. The stretch between Koblenz and Bingen takes about 3 hours to cruise if you don’t get off the boat and has a dozen castles or so that brood over the river. Also on this stretch is the Lorelei cliffs.

This is a perfectly doable daytrip from either Bonn or Cologne. There should be trains from Frankfurt to Koblenz or Bingen as well. If you really have the full day, take a chance to get off the boat and walk around one or several of the little towns and have lunch by the river.

There are cruises that run both directions along this well traveled stretch of water. You can start in either Koblenz to the north or Bingen to the south. Ask directions or follow signs to the docks. Both places have a train station with decent connections. Some of the cruise lines may also honor Eurorail passes, making the full day trip with train and cruise worth it.

This is a phototour teaser, not necessarily a “how-to”. Check out this full week itinerary for the Rhine Valley that includes a lot more information.

The southern end of the stretch of the best castle seeing is Bingen. Near the dock is a nice promenade, that had a restaurant and beer garden to enjoy a beer by the river as you wait for the cruises.

For the twelve-year-old in all of us is the lovely town of Assmannshausen. I’m sure the name has none of the connotations in German, but I just giggle when I hear it so haven’t bothered translating it.

The Lorelei is about halfway between Bingen and Koblenz. The cliff was featured in a very well known old poem about a beautiful woman, a siren, that sang to sailors from atop the cliff and lured them to their destruction. Women apparently did this a lot in ancient times. The cliffs look over two towns both somehow named St. Goar, (ok one is St. Goar the other is St. Goarshausen, but still). It also looms over my favorite castle Burg Katz. There is a great story about the Castle Cat (Katz) and a Castle Mouse (Maus) that I always remember, but could easily be a joke or a rumor or a hallucination.

The area is probably the one I would pick to explore given a few extra hours. We had lunch there once, but on the wrong side of the river from the cliff. Apparently there is a path to climb up and a statue of the siren near the flags.

The Rhine in this stretch goes through a number of cliffs and steep hills. Doing this trip is a good reminder of why the Rhine was a barrier to armies for thousands of years. Both the Romans and the Allies during the second world war had to contend with this mighty barrier. There are very few bridges, but lots of wineries.

There are a number of other castles on the route, both up on the hills and next to the water. The Rhine was a major transport route and local lords built castles to control the lands and extract taxes from those using the waterway. One of the more impressive is Pfalzgrafenstein. It rises like a great armored ship from an island rather than looming form a hilltop. We saw people out walking around it as we cruised by on the boat. I would choose to stop and look around here too.

There are a few castles along the route that are various forms of hotels, youth hostels and restaurants. You really could spend several days wandering and seeing places. The boats usually stop at several towns along the route including Bacharach, which has a great name as well as a cool little town center.

The northern end of the stretch is Koblenz, at the convergence of the Rhine and the Moselle. It is a fair sized town with a university, as opposed to most other places along the way which are really just villages.

There are a number of great sites along this stretch. On a nice sunny day there is no better way to see this part of Germany.

German Cellphones: A Short Primer Freak yourself out