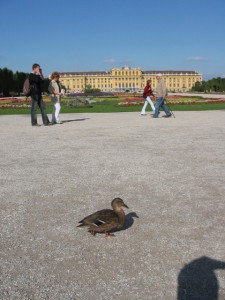 Vienna holds a pretty special place in my heart. After the town that I live in now, it is the place that I have been back to the most in Europe. Each time I enjoy going back to explore a little more of the grand city, as well as reawakening memories of past trips.

My first trip was 1997 on a Summer Study Abroad trip to study the Art and Architecture of the Jahrhundertwende (German for change of century). So we were studying the many Art Nouveau/Jugendstil buildings in the city. And there really are a ton.

The latest trip was just this past Easter to visit some friends. There was even a short time when I moved to Europe that I thought I would end up living in Vienna instead of Freiburg.

Vienna is at it’s core an imperial sort of place. It was once the center of Europe both culturally and civilly. This sense lingers in a lot of places. The city is dotted with palaces and grand buildings amongst the wealth and culture.

Here are some of my favorite bits of the city. 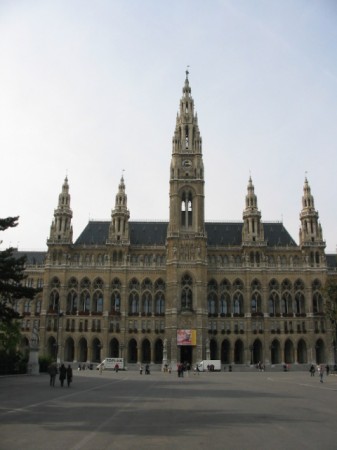 The Viennese city hall is all gothic spikes and arches. I love this kind of thing.
The building sits amidst a pretty big park with sections dedicated to sitting and some filled with roses. The massive paved plaza in front of the Hall is used for events. I know that the Christmas market is there and I have seen both concerts and skateborder conventions being played here. 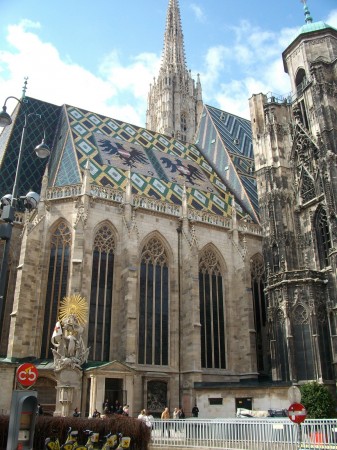 This is in the center of the old city and is the towns Cathedral and city symbol. Also called Steffl, the gothic spire extends above the city and helps in navigating sometimes confusing streets. On my last trip here I had the privilege to go to an early morning Good Friday service here. The reverberating latin and german chants were fantastic. 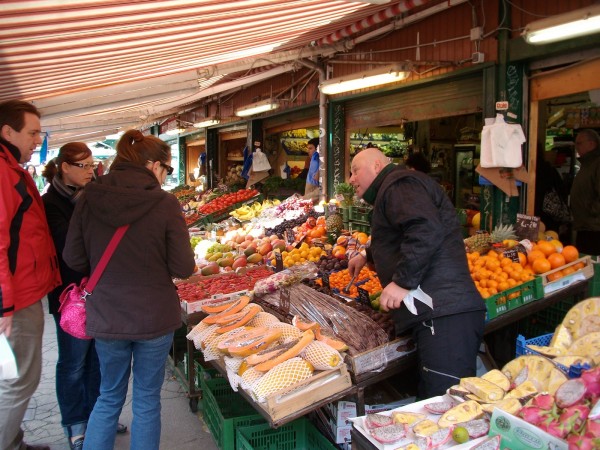 There are a number of openair markets in Vienna, but my favorite place to eat and stroll is the Naschmarkt. This is a stretch of buildings and stalls extending toward town from the Kettenbrückengasse station of the subway. It is like a permanent market area with stalls selling fruit, vegetables, cheese, meats, nuts and a number with selections of olives, chilis and nuts showing it’s international flair. There are a few restaurants mixed in as well, with tables for drinking a beer and watching the locals. I like to just get a back of nuts and stroll while eating. It would also be a great place to gather the ingredients for a hostelers dinner.

Extending the other direction from Kettenbrückengasse is a Saturday fleamarket. 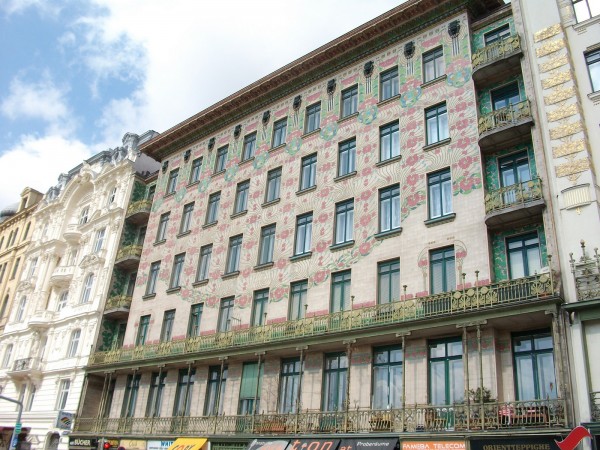 Called Jugendstil in German, the highly decorative buildings abound in Vienna. This particular example is near the end of the Naschmarkt. For more check out the gallery below. 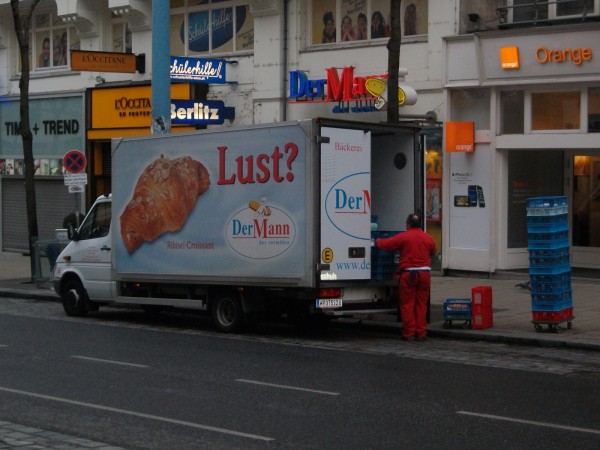 Ok, I’m not a great shopper. I do however like shopping streets, as usually the best people watching. Extending from the Museum Quarter to the Westbahnhof (western train station) is Mariahilfestrasse. Mostly clothing stores, but also a number of little places to eat on the street. Bakery’s too as seen above the delivery van on it’s early morning run.

The other place to see and be seen shopping are two streets leading away from the cathedral: Graben and Kärtnerstrasse. Vienna is often about extravagance and this is the area to see it. 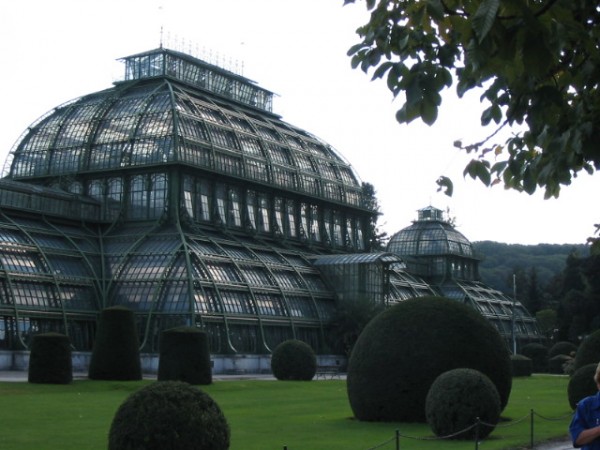 The palace of Schoenbrunn is in every guide book and tour of the city. The main building is indeed an impressive museum. The grounds are expansive and contain both a Zoo and this building, the Palmery. It is a little out of the way, but I really enjoyed going to it. The emperor was a collector of exotic plants and stored his collection here. I love the period arching glass and metal structure. Look in the gallery below for a closeup of one of the flowers, as well as other pictures of the palace. If you go out to Schoenbrunn, it is worth the hour or so to take in the Palmery. 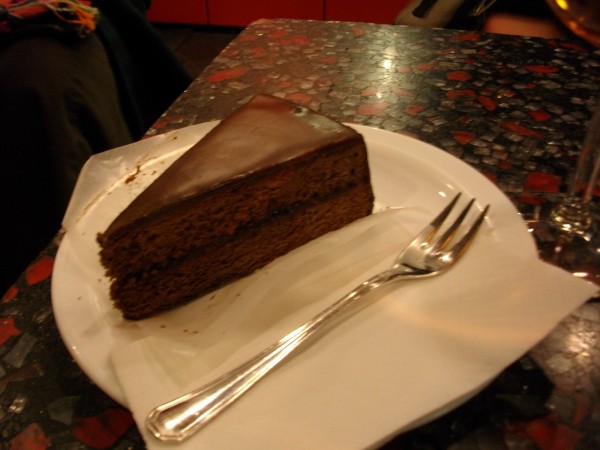 Vienna has a great cafe culture. Coffee is almost synonymous with the city. The legend says that the retreating Turks left bags of beans around when they fled the city after occupying it. In addition to coffee comes naturally cake. (it’s perfectly natural, even at breakfast.)  One Viennese specific cake is this, Sacher Torte. It is named for the Hotel Sacher who claims it’s origin. However Cafe Demel’s argues for that right as well. For my money, I like the Sacher Torte at Cafe Aida. Aida is a chain of pink painted cafes all over Vienna. They don’t have the posh interiors and snooty names, but the cake is just as good. I like just sitting and reading with a piece of cake and a coffee.

I had been to Vienna a few times before I went back in Easter. My friend however had not and was really interested in the Spanish Riding School. The school is in Imperial Palace on the Ring in the center of town. It is the home of the high stepping performance Lipzaner Stallions. I’m not much of a horse person, but even I admit that watching the morning practice and taking the tour was indeed impressive.

Go early and find the ticket office. When we were there you First went in and bought the ticket and Then went to wait in the line with everyone else to admittance to the hall to watch the practice. We first stood in line, thinking it for tickets and finally got told otherwise.  There are not many seats inside, so expect to stand for at least some of it.

There are a number of museums and operas in town, so if you like culture this is definitely a place to stay for a few days. The cafe and park culture means abundant opportunity for people watching. Despite the bent toward the cultural, Vienna has several universities and tons of places to go out as well. It is a modern city under the decoration.

If you want to see outside of the city, the Wienerwald (Viennese Forest) is a short ride out of town. Ask if it is New Wine season (Heurigen). I believe it is late summer usually. Wineries open up places to taste the unfiltered sweet new wine. I enjoy this in Freiburg, but have never been to a Viennese one.