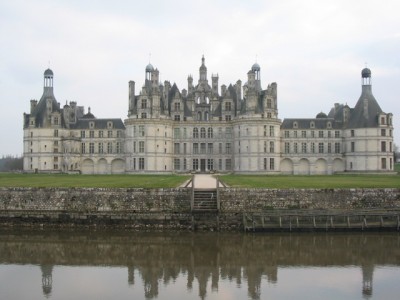 Time for another phototour. This time the castles of the Loire Valley in France.

After my semester finished in February of 2004, I planned a big trip. I had seen pictures of the castles of the Loire and decided to go see them. This is the same trip that ended up going through Venice at Carnevale. So check out those pictures as well.

Ok, first off, February is really not a good time to visit these places. Sure there are fewer tourists, but the gardens are not in bloom. These castles are almost more impressive for the gardens than for the buildings; so do yourself a favor and pick a warmer time to go. I still had a great time. 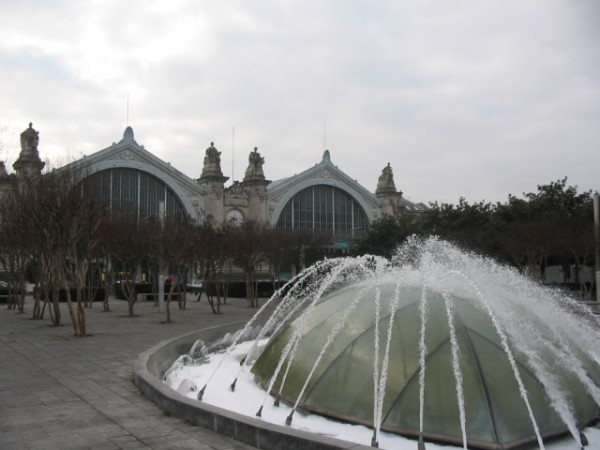 I stayed in the centrally located town of Tours. It is big enough to have hotels and restaurants that tolerated English speakers pretty well. The tourist office in Tours has a bunch of brochures for van tours out on various routes of castles. I looked into going out to the places individually, but the trains are not set up for it. Really the van tours were awesome. The guides have great stories of the castles and spoken every language imaginable. I didn’t feel rushed either. The vans hold 6-8 people so are a good place to meet new friends. 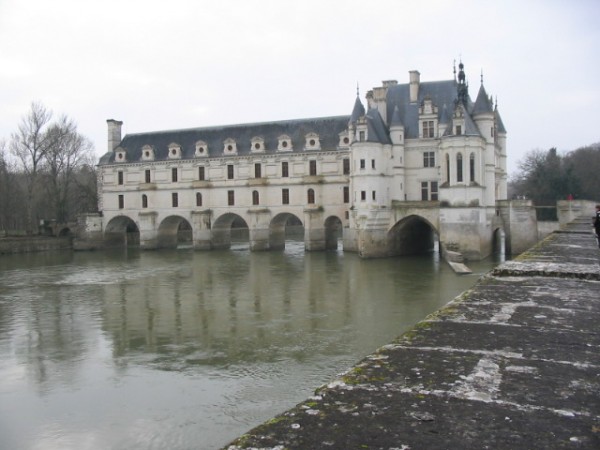 This was my first castle and my favorite. The architecture is neat and the stories doubly so. According to our guide, it is what developed from an armored mill and bridge.

At one point the ruling king gave it as a gift to his mistress. The queen, understandably, didn’t like this. When the king died, she was down within hours to kick the mistress out. I like stories of intrigue, so this appealed to me.

The kitchen of Chenonceau was impressive. There was a contraption that lowered a wheel into the river, which turned in the current and turned the roast on the spit. 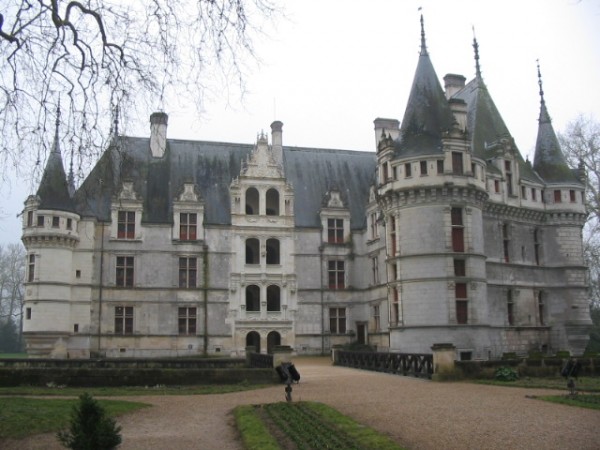 A quaint castle, if you can apply that word to a castle. It was floating in a wide moat. I don’t remember to much, other than I was more interested in the outside than the inside of this one. 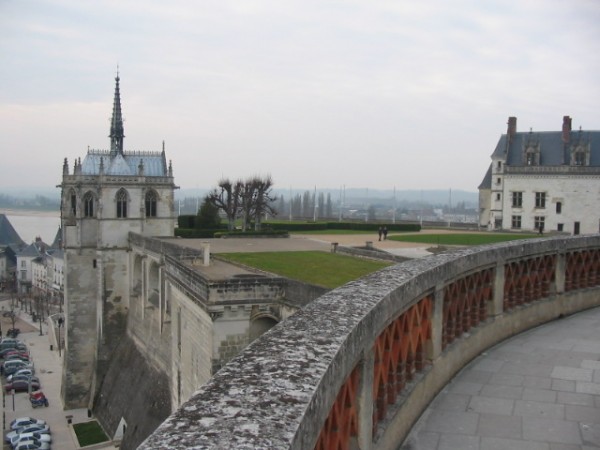 Ambiose was the next stop, on a different afternoon tour if I remember correctly. It is perched on top of a hill overlooking both the town of Amboise and the river Loire. There is a keep, but the part that impressed me the most was the chapel hanging almost separately over the edge. This castle was used by the french king. Leonardo da Vinci spent time here at the behest of the king. 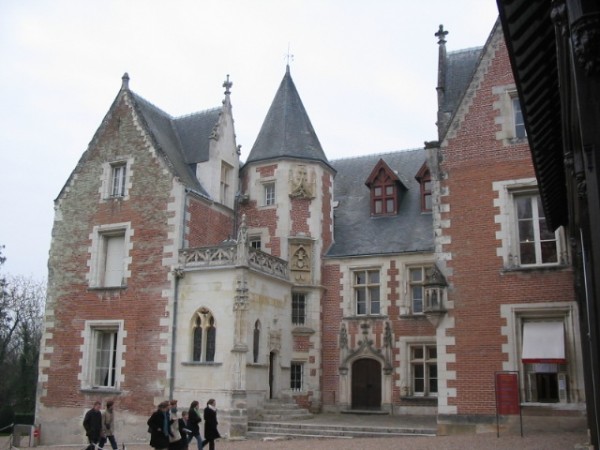 The Clos Lucé was a smaller manor house down the road from Amboise. It was given to Leonardo da Vinci by the french king to stay and work in while he was visiting. The exhibit in the basement was neat, showing working models of a lot of Leo’s ideas. The garden had some life-size models of other inventions. It was too rainy to enjoy them, but it was so cool to see. I’m a techie science geek, so Leo’s work was awesome to see. The gift shop is overflowing with Leonardo da Vinci stuff. 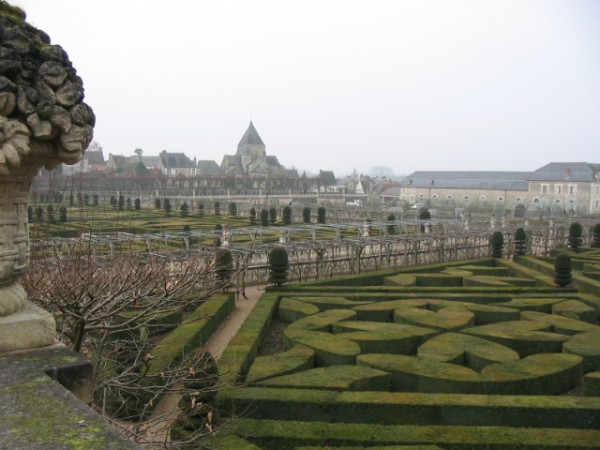 Villandry was the place that made me wish I was there in a different season. The gardens are extensive and complex. It was neat to walk around, but the postcards on display showed just how much more amazing it would be when everything was in bloom. 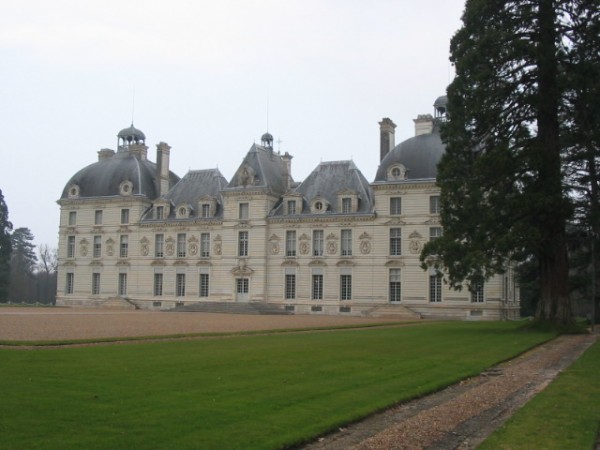 One of the smaller stops was Cheverny. I had originally picked this next van trip to go to Chambord and this was on the way. It seemed more like a manor than a castle with big wide grass lawns. I remember a feeding of the hunting dogs as I think it was known for the hunting. There was an exhibit of Tintin comics and a hazy memory of a connection there as well. Except I have never read a Tintin comic, nor really heard of them before this trip they didn’t interest me at the time. 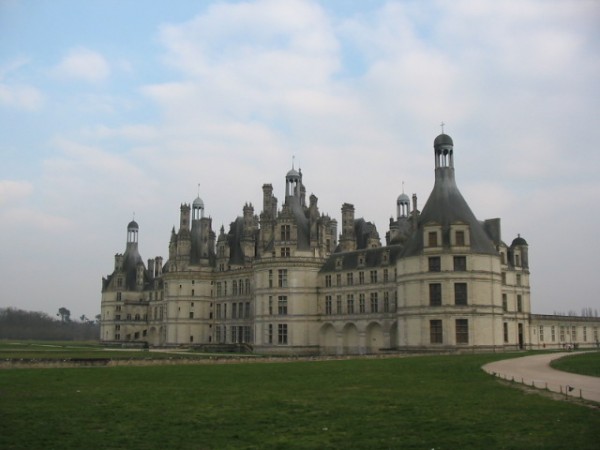 One of the castles that I really wanted to see while I was here. I was not disappointed. While it did not surpass Chenonceau as my favorite, it was still very impressive. It was build as a royal hunting lodge! A hunting lodge on grounds larger than my entire neighborhood at home. It is very big and very impressive. The roof spires are really cool.

I liked the architecture of this one. The spiral staircases are impressive. I remember the tour talking about this place only being used by the king once. They had to send the servants ahead several days in advance to light all the fireplaces and warm it up.

I would really recommend the van tours of the castles from Tours. I had a great time and got to see a lot in a short amount of time. I was there only for a few days and could easily have spent more. If you are ever in North Carolina, US, go check out Biltmore Estate in Asheville. Wikipedia Link It was inspired by many of these castles along the Loire.

Ali did a similar trip in a nicer time of the year. Check out her pictures of the Loire Valley and tour.

Indecision Of Language and Beer