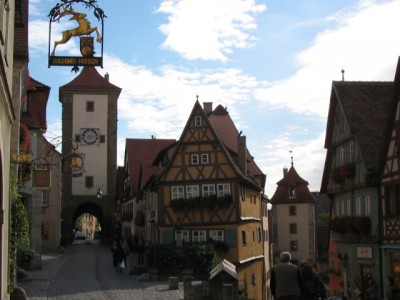 No clue where I picked it up, but I tend to have this voice deep in my head about the big decisions “don’t make the wrong choice, you will not get another chance.” This is fine when dealing with actual life or death decisions, but for the rest of life’s decisions it makes things more difficult. In choosing to travel and especially in choosing to move abroad, I learned more and more that most decisions are not final. Sure I was moving abroad and selling off a lot of stuff at home, but I could (and technically still can) always go back if it didn’t work out.

Now I’m not saying that decisions don’t matter and should be taken lightly. Certainly look at the choice and make a good choice when one path is obviously better than another. I’m talking about the decisions that are so weighty as to drive me into cycles of indecision. If neither path seems to be fully better than the other, then maybe there isn’t a wrong choice.

Deer in the Headlights

I love this metaphor picked up from a friend in college. If you are driving at night and come up on a deer, they will usually freeze in the lights. They twitch to one side, then to the other seemingly unable to decide which way is the best to avoid the oncoming car. This is a neat metaphor, because it is a life and death decision where seemingly it would make good sense to look at both choices carefully and make the “right one”. Except in this case the only wrong decision is not making a choice. Left or right are perfectly fine and safe, only by staying frozen by indecision is the deer going to get hit.

When traveling, I get into this state when picking where to go next if I don’t have a direction in my head. I think about all the great stories I’ve heard from fellow hostelers added to the shiny brochures and pictures and can’t pick one. By deliberating too long, I miss out on all the opportunities. Which is stingingly ironic when the delay is based on not wanting to miss out on the best choice. The fear of making a bad decision prevents any decision.

Repeat, but no Rewind

That state of indecision is based on the idea that there are either “wrong” choices or a “best” choice. This fear to not make a bad decision keeps me looking carefully at all the choices until it is too late.  Especially when you are dealing with something as fluid and dynamic as travel there are rarely bad choices.

From each decision stretches out many paths. We can read the signs and look at the paths, but from that point you can’t really tell what you will see along the way. Knowing where you want to go means reading the destination signs, and then making a decent choice of the paths going there. Each path just gives a different view. There are almost guaranteed to be learning experiences and good places along each choice.At each juncture there is always the chance to change your direction. No longer want to go to St. Louis, ok pick a different path at the next turning.

We can’t back up time and have to keep going forward, but there are way more turns and decisions than we ever notice. Most of us (me included most definitely) make most decisions out of habit. We follow the same route and don’t even see the other pathways. We acknowledge that we can change our direction at any turning, but just don’t see the turnings for what they are.

Growing up in the eighties I saw a number of movies over and over. One of these is the Labyrinth. If you have issues with decisions or fear or are a whiny 18 year old girl, it is really an awesome movie. Please go watch this if you haven’t. One early scene has Sara running down a long chasm looking for a way into the maze. She complains about seeing no turns or openings or anything. The response from a small worm is “there are plenty of openings, you just aren’t seeing them.”

Seriously people, Labyrinth is a great film. Those of you too young to have had to watch it over and over as a kid should see it.

A Moment of Thanks Phototour – Loire Valley Castles