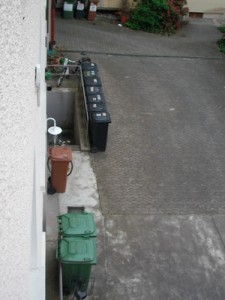 As I’ve said before, I am a fan of slow travel. Of staying in a place long enough to feel a part of it and not just a passerby. When you do this, you get under the surface and see a deeper layer of a place. This is often very rewarding. I see travelers looking for these things and calling it ‘the real experience’.

Even the basic traveler knows Germany as a place of order and planning. The trains run on time and everything is in place. Like most stereotypes this is also based in truth. Society here is based on planning and managing expectations. This sounds great until you see the dark side.

Talk to any expat living in Germany and even if you have nothing else in common, you can talk about German Bureaucracy. Everybody has wacky and wild stories of oddities in the system. Poof, instant bond. Heck talk to the locals about it too, unless you happen upon a bureaucrat even the Germans will have odd administration stories.

Another part of the system is that often you need a prerequisite piece of paper or stamp to get something done. This is invariably only available at a different desk/office/building across town/(sometimes)city. This other place will also have odd hours and probably won’t be open at the moment.

Flipside: I went into the tax office to turn in my taxes on the last day they were due. In the US this would have been near on suicide. Nope, the office was not much fuller than normal and people were all waiting patiently. I waited 15 dings on the number machine (less than 30 minutes) and handed over my hand written forms. She checked them through and said thank you.

Tip: Because most things need to be properly approved and signed off on everything takes longer. This extends to internet installs, bank accounts and anything else they are required by law to notify you by mail with. Give yourself a lot (weeks in some cases) extra time to expect things to get done.

Aside: There are often fees for certain tasks you need completed. The office worker wants to see the receipt when you go to floor 3 to pay and come back.

Most of Germany is very clean. Even the bigger cities are picked up and cleaned with regularity. Ok, my (new) hometown of Freiburg is a little obsessive about the Green Movement; but I’m ok with that. The darkside is that trash is required to be separated. There are 4 places that trash can go. This was the one thing that I really had to learn and was happy for German roommates when I first moved here. The idea is that certain materials can be recycled or disposed of in certain ways. Here is the general rundown:

Yellow Bag : You pick up rolls of these at certain stores.  They are for plastic, metal, packaging, styrofoam, that kind of thing.

Green Bin: Paper of all sorts.

Brown Bin: Food waste and compostables. (Although paper seems to go in here as well to wrap up the foot and keep it form getting things dirty.)

Black Bin: Everything else. You pay by the volume though. X Liters picked up every 2 weeks.

So, at the outset fairly straightforward. Then come the rules. My roommate (maybe as a joke I dunno) told me that the butcher paper needs to be itself separated. The plastic side from the paper side to be put in proper bins. I was at a meeting and one person mentioned the idea of putting bottles in the black everything bin, and got the stink eye from an older woman about it. Bottles aren’t even in this scheme, you are supposed to take them to specific recycle places and throw them in from 9:30-17:30 M-F (again sucks if you have to work.)

Flipside: Things are clean, and plenty of work for the various trucks that come pick up the bins, not to mention the administration that deals with signing up for bins and issuing stickers.

Tip: When you move into a place, check that you actually have a black bin you can use. Some buildings pay for communal ones, but when I moved in I had to sign up for my own. See above in bureaucracy for the fun it was.

Aside: The new trash stickers come out in January. This says you have paid your yearly taxes to have your trash taken away. However, apparently the glue doesn’t work well in the cold or the wet. Guess what it always is in Germany in January? Yup, cold and wet.

One of the other things that I just never really bother much with as a traveler is the deposit system on bottles. Plastic soda bottles are way thicker than the ones in the US. When you buy a soda or beer bottle in a store, you pay a deposit on the bottle (anywhere from 8 cents to 25 depending on the type of bottle). This is called “Pfand” in German. When you return the bottle to get your Pfand back, they get washed and relabeled and reused by the company. You can even see the washing marks on older bottles.

Ultimate in reuse then, right? Well maybe, but it can be annoying. I work in town and live outside of it. I was buying bottles after work, but returning them to the store next to my house. I had been doing this for months without thinking. The machine scanned them and took them. One Saturday, a guy comes out from behind the machine (the machine scans them, but they are still sorted by hand???) and tells me that the bottles I just put in I have to take back. Apparently, even though the machine took them, since the store doesn’t sell that type of drink he has to throw them out!!  So it is almost a form of loyalty program. You have to go back to where you bought them to return them, so might as well shop there again.

Flipside: It is probably better for the planet. I wonder about transport costs, but saves on landfill. It is also sometimes nice to go into a store and have a little paper for 5 Euro off your purchase due to the large amount of beer bottles you just gave in.

Tip: There is a special triangle symbol on newer bottles. These are 25cents Pfand, but will be taken by a specific different machine that crushes them. I have however not had people complaining about cross store issues.

Aside: During Christmas markets and at some beer gardens , you pay a Pfand on the plate and silverware.

There are lots of things I knew from being a traveler, but they take on a different perspective when you live here. Here are just a few.

These are just a few things I have seen in my life in Germany. Please share your ‘under the surface’ experiences.

What is home? Traveling at Home – Phototour of Freiburg Market