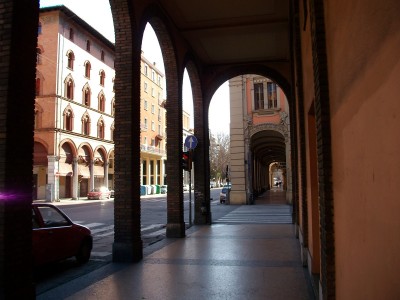 Hostels? Package Tours? Backpacking? Round-the-World train trips?  All wonderful ways to travel, but language schools are an often overlooked resource and can provide a really interesting alternative with a lot of benefits.

They often help with housing and visas.  Provide a reason to get up in the morning and a large group of friends with at least one thing in common.  They usually have organized activities outside of class directed at exposing people to local language and culture. They can be cheaper than going on your own.  And best of all, who wouldn’t like to speak another language.

I live in Germany and enjoy traveling around Europe. I had been studying German in school and university for nearly 10 years when I first moved here. In fact learning the language was what opened the country and the culture to me. In fact it wouldn’t be too far to say that learning the language really awakened my joy of travel.  Being able to speak the language let me see deeper in the culture and interact with locals more. It also helped in the all-important aspect of reducing the fear of foreign places.

When I moved here, I decided I wanted to learn another language. I picked Italian and signed up for an evening course. After 6 months I started looking for a vacation spot and choose a language school in Bologna.  Woah, visiting language schools is a really awesome way to travel I found. There are so many benefits and fit squarely in the ‘slow travel’ box for me.

The school in Bologna and the language schools I know here in Germany all offer help with finding short term housing while you are studying with them. I see the posters around town here looking for rooms to rent to language school students and know a number of english speakers at the schools who got housing through them.

Imagine it like advanced couchsurfing. In most cases the rooms are single fully furnished rooms in an apartment. So you usually have access to a kitchen and people to talk to to practice language.  It isn’t a hotel or hostel, so often cheaper than either. They are in the residential areas of town, so you get to see more of how people live in your chosen city. In Italy, I spent only one week and they still found me a place to stay (on two different trips to them). It was a rented room in an apartment in town with other Italians. This in an of itself makes the experience worth it. The rooms were cheap and easy walk from town with great people. I did hear one horror story from a friend on her roommates, but I had no issues. Even made a friend on one trip that I got to see again on the second.

A school should be able to provide a proof of enrollment that will help with getting your visa. You will likely have to apply for it yourself, but the language school should be able to provide instructions and support if needed. Check with your chosen school and country, but here at least short term language school visas are a possibility. The language schools should have people that know the ropes or at least advise you who to talk to. This can be a real boon for reducing visa headaches, though definitely ask how much support they can provide.

One of the hallmarks of slow travel for me is the ability not only to meet people, but build up friendships with them. In a hostel this can happen, but when people moving in and out on their own schedules it can be hard.  At language schools you will have less shift and see the same people every day for at least a week, often much longer. Since all the people are there for a reason (to learn that language) you start out with something in common, which is really helpful to be able to talk to people. I met a lot of people who were at the school for several months, and I have local friends that have done full semester courses.

Every language program I have done organizing activities for the students. Since all the students are learning the local language, the activities involve showing off the local culture and language off to the students. This can range from a (free) guided tour of the town by a local to an organized meal at a local restaurant to movie night at the school. Doing a month long language program in Germany a few years ago, they organized bus trips for us on the weekend to various local sites. This gives just more incentive to hang out with the new friends from class.

Routine and a Homebase

I kind of like routine. I like having places to be and seeing the same things become familiar. It helps me enjoy travel and not feel rushed. This is a prime reason I like the idea of slow travel. Language schools give you this without restricting the freedom too much.  Classes are often only in the morning, so it gives a good reason to get out of bed despite a late night and just get stuck into your day. In the Bologna case, because classes started at the same time every day, we got to know the guy that ran the bar around the corner quite well, because we were there every morning for coffee and breakfast. He added a point of familiarity, and it was nice to have him ask where we were when we missed a day. That “everybody knows your name” feeling makes the travel more personal. (His name is Max BTW.)

Being attached to a school is also a nice homebase. Schools often have computers with internet access to update your blog and research travel destinations.  There are locals working there who can advise on daily things, cool places to go and help if something goes wrong.

And come on… in addition to all of this, you get to learn a new language.  Who wouldn’t want to talk about learning Italian in Italy. And if you like a country well enough to travel a while there, knowing at least a little of the language will help you get the most out of it.  And with many years of school-learning German and my few weeks in Italy, I can tell you practice is the fastest way to learn a language. When you hear it all over and use it more often than 45minutes right after lunch, it sinks in faster and better. Nothing beats learning a language live on site where it is spoken.

Classes only usually take place in the morning giving you tons of free time. The afternoons can be used to explore the town. Since classes last for one week to several months, you get plenty of time to really get to know the place not just as a tourist, but as a short-term resident. Since you have a routine and a home base, you don’t get sucked into seeing things too fast. And with plenty of people to meet at the school with interesting stories from all over, there is no lack of human contact and new friends to experience the city or travel somewhere else on the weekends.

Even if you only have a week or two to travel look into a language school as a possibility.  Definitely not an all-inclusive resort or package tour, but something better.  Even if you plan a longer trip in a region, think about a few week language course first. Ease yourself into the place, learn the language, and meet new people to visit later.

Madrelingua – This is the school that I went to in Bologna. If you want to learn Italian, I would heartily recommend it as a school and Bologna as a great town.